The Iberian Pig is the key element of getting Iberian real products, and, many times, this part is the unknown part of the process. For getting a qualified Iberian Ham, the primary raw material must be as pure as possible. 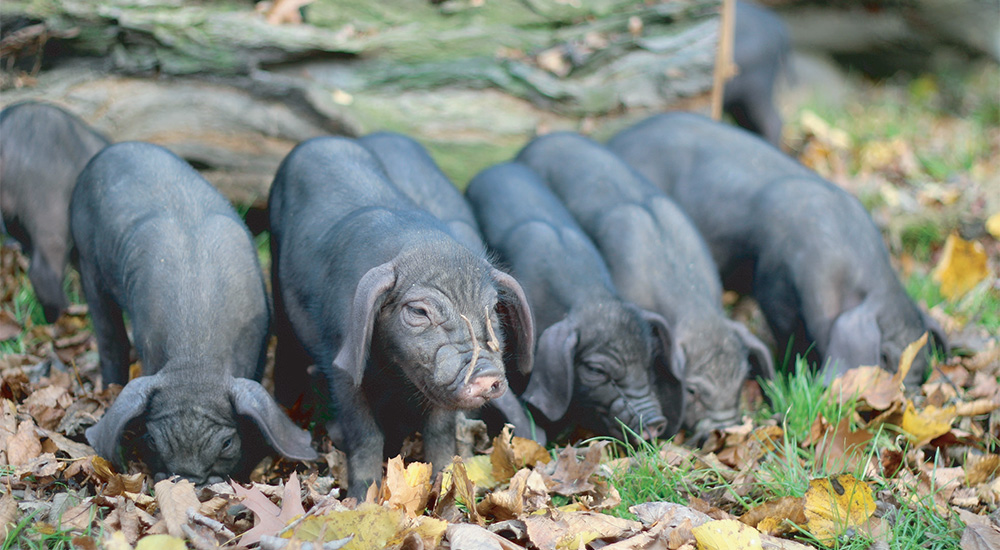 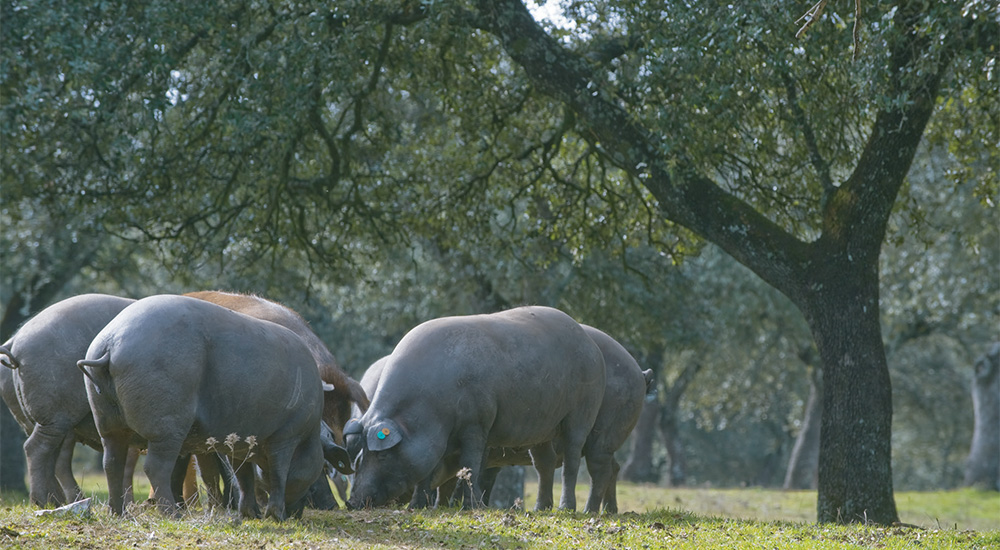 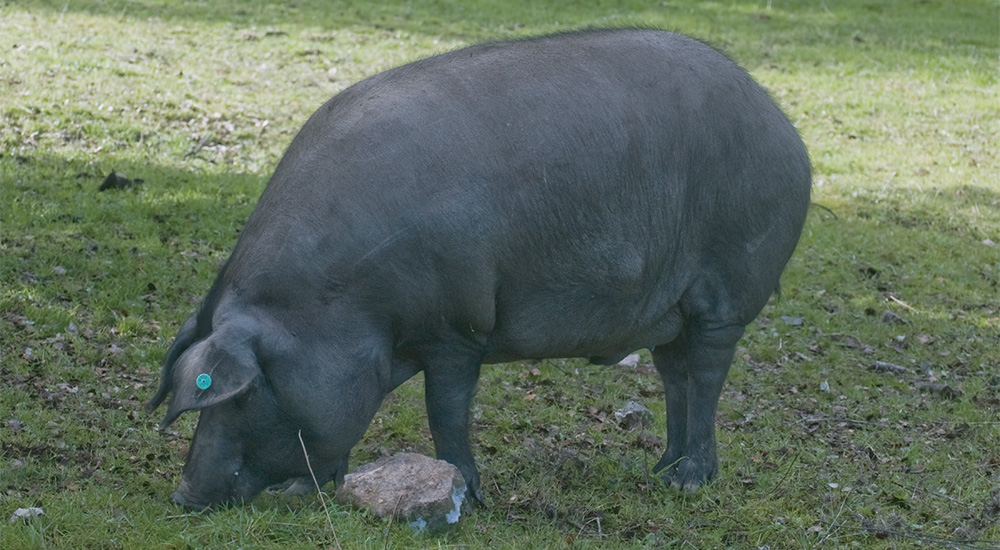 One of the interesting facts of the Iberian Pigs is that they don’t have sweat glands so they cannot sweat. They roll around the mud to refresh themselves and to lower down their body temperature, essential fact to confirm the products quality we obtain after the pig slaughter. Recent studies from the Autonomous University of Barcelona show that the Iberian pig genome has hardly changed within five centuries, maintaining their properties almost intact for over 500 years.

Therefore, the Iberian pig breed is characterized by its scientifically proven purity; its breeding is done in freedom based on a natural diet because there, is where we obtain some of the tastiest delicacies of our gastronomy.

It is a medium size pig whose skin can be pigmented from blond to black, going through another color-scheme. These pigs are distinguished for being raised in the extreme conditions of “La Dehesa.”

It’s essential to consider that one of the characteristics which make them unique is their diet based on acorn and grass. It’s in the “Montanera” time, from October to February, when the acorns start to fall from the cork and holm oaks trees. Therefore, the Iberian pigs grow up in a natural environment, and their breeding process takes place on the exploitation of natural sources all the time. Nonetheless, they don’t only eat the acorn, but they could even eat fresh grass to refresh themselves or, even some insects and snails. About the quantity they can eat during their life, it is estimated they could put on between 80 to 100 kilograms weight, and regarding the fresh grass, they can eat till 3 kilos per day.

Without a doubt, the breeding in freedom is vital for the pig, as the continuous movement they do, looking for acorns and grass allow them to obtain the slight fat infiltration which makes them have that characteristic and exclusive flavor. It is important to have enough hectares in “La Dehesa” so that, the pigs can move around with freedom and what will allow them becoming a better quality one. 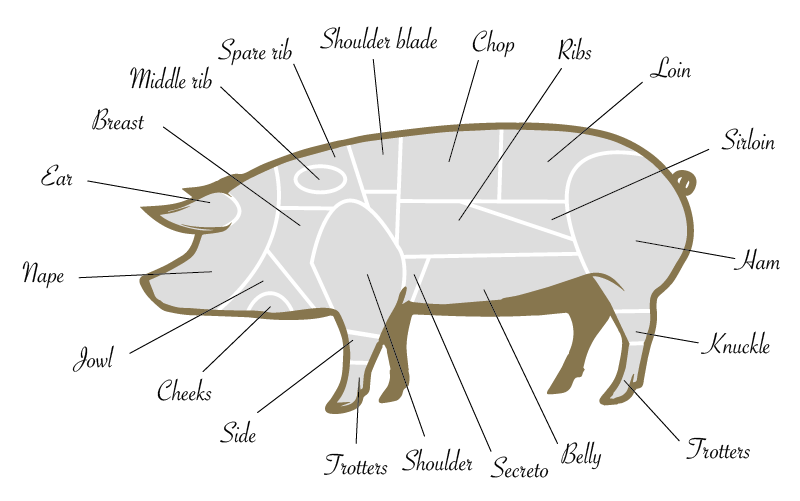 “Everything but the oink”

Here below we describe the kind of meat this gentle animal offer us.

Starting from which perhaps could be the most popular meat from all, the Pork Fillet (Solomillo).

From each Iberian pig, we obtain two pork fillets of about 350 grams each. For their texture, aroma and flavor are the greatest demanded fresh pig meat.

It is also well known and valued by the customers. It is called “cruzeta” or “lomito” in some places. This piece of meat is located at the internal part of the loin which is close to the animal front legs in the underarm region. As the sirloin, we just get two pieces from this meat. We recognize it by the white undercover fat which is seen naked eye and gives a delicious and juicy texture.

It is the piece of meat we take from the pork ribs. They are thin steaks and have pretty much fat infiltration. It is so tasty as well.

Other valuable pork meat located over its shoulder blade. It’s taken out two pieces of about 500 grams each approx. It also has intramuscular fat which provides a juicy taste. It’s so valuable. Due to its quality, we use it to make delicious cold cuts like “Iberian Acorn Loin” (lomito ibérico de bellota) or Morcón (large blood sausage).

Meat piece, we also obtain two with a triangular shape, it is taken out from the back side of the loin. Small size and with a hundred grams weight, it’s tasty, and even though it is not often requested up to now, it’s position beside the pork loin make it has an excellent texture and quality. It is also used in the industry to make the “lomo embuchado” (pork loin).

The cheek is the lean piece of meat which is taken out from the two bottom sides of the animal jaw. It’s characterized by its intramuscular fat and its juiciness because of their exercised muscles during the feeding period. Its weight is about 200 grams approx.

A piece of meat made up basically from the Iberian pig fat and a minuscule piece of meat. Widely used in the traditional leading role in the BBQ’S. As it is an Iberian pig growing up in freedom with acorns and grass from Dehesa, bacon is an excellent quality because of its organoleptic qualities and good cholesterol for people.

As bacon, the pig dewlap is another piece composed of intramuscular fat removed from the animal’s neck.

The solid piece with thick jelly texture usually used as a complement in stews and cold cuts. Its weight is about 250 gr.

It is a piece of meat is removed from the upper neck side of the animal.

It’s the name we give to the pork loin without the spine, but with a part of the ribs, We get great ribs to bake, roast or to grill them.

A piece of meat located between the spine and the loin. It is also lean meat with a fat covering that gives a great taste and juiciness..

The Iberian pork ribs have a high value due to its juiciness and the mixture of lean meat and fat.

It is the extricated meat skillfully from the animal ribs, so tasty when it’s grilled.

It is the meat cuts extricated from different parts of the animal. We use it as a complementary ingredient in cold cuts or apart to cook stews.

They are the cuts of meat that can be extracted from different parts of the animal. It is used as a complementary ingredient in sausages or separately in the kitchen for stews.

It is also called “careta.” It is the piece of meat formed by the ears, snout and top lip. Characterized by its jelly texture, it is used for cooking stews or as the principal ingredient for the traditional “Almorraque extremeño.”

Although it is usually connected to the jowl, it is sometimes cut separately to be used as a complement in stews, to which it provides a gelatinous texture.

These are tonsils of the Iberian pig that are characterized by their gelatinous tissue and a strong flavor. 50 to 100 grams of each animal are obtained.

They are the testicles of the Iberian pork, and they are part of what we called “casqueria,” altogether with the entrails of the animal. As it happens with the “castañetas,” it intakes is reduced to people without prejudices of its taste.

As it names suggests, they are the limbs where the animal rests on. It is used to prepare stews and elaborated dishes, due to its cartilage it offers a gelatinous texture.

With thick texture, it is used in the traditional Spanish cuisine and mainly as an appetizer in bars and restaurants.

Subscribe to our newsletter to not miss any news!

You must enter a valid email address.
There was an unexpected error.
You have successfully subscribed!